Is Barbie sending the wrong message by being skinny, vain, and rich? Parents blame Barbie for being a bad role model by wearing risqué clothes or too much makeup.

But the reality is that television commercials, the internet, and popular music that children listen to could be a big contributor, too. Parents are so worried about an inanimate plastic doll, but they need not look far to find other influential culprits. 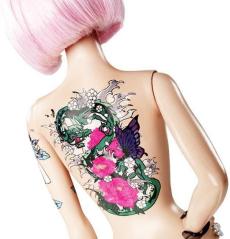 The new “Tatted Up” punk Barbie doll has started an uproar centering around Barbie setting the wrong example. This Barbie doll was placed in the collectible aisle and for adults. Before you go to the Barbie Collector website there is a warning saying “You are now leaving the Barbie website; this website you are going to right now is for adults.”  The fact is, many parents are ignoring these warnings and giving these dolls to their 5-year-olds.  This sounds more like  and bad parenting than the attempted corruption of young girls.

All these effects regarding self-image and behavior are not necessarily Barbie’s fault. There are many other factors that add to the problem. One example would be TV commercials constantly promoting weight loss products.  Or let’s consider, for a moment, the skinny models we find in programs like the 2011 Victoria Secret fashion show.  These girls are so influenced by so many other things that it is not just Barbie’s fault at all.

So why should you blame Barbie when there are so many other factors?